Jindal Holds the Jobless Hostage in Bid for Political Power 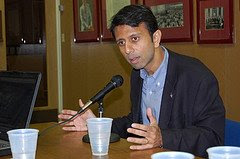 As the man many Republicans tout as "the new face" of the Party of No, our governor finds it necessary to fly in the face of most economists, who consider the extension of unemployment benefits the most stimulative aspect of Obama's recovery package. Jindal initially claimed that he may well refuse all aid offered from the stimulus package, but apparently coming to cursorily understand the political stakes involved in that risk, deemed it appropriate to deny funding only to the most vulnerable and least politically powerful beneficiaries: people who have lost their jobs. Those left unemployed by the failing economy (or by Jindal's decision to cut funding for state jobs in order to initiate state tax breaks last year) may be among the least likely to become formidable political enemies given the humiliation and sense of powerlessness associated with poverty, one of the greatest stressors that humans face. And targeting them to suffer in his attempt to demonstrate that the tested-and-failed conservative ideology will somehow work under his leadership aligns him with the petulant strategy of the shattered Republican Party--to cover their ears and close their eyes in the face of economic collapse, chantinmg the mantra "To the only sacred entities in the Universe, tax cuts and a shrinking public sector, we submit ourselves."

Jindal's justification for declining the funds to extend unemployment benefits is entirely lame (though mainstream media seems not to notice)--that in three years the stimulus money will be exhausted and, at that time, prolonged unemployment benefits would raise unemployment insurance on businesses. Ahem. The entire purpose of the stimulus package is to reduce unemployment and rebuild the economy, and when the stimulus funds run out in three years, Bobby Jindal can easily reduce the length of benefits in Louisiana with the warmest of support from his constituents. If he wants to get a head start on that, he can easily make it a promise now, one that he commits to writing, to be executed at the end of his first term. So if this "raising-taxes-on-bidniz" business is the only excuse that he can come up with, his real reasons must be entirely unfit for mainstream consumption.

I see two interrelated motivations here. The first is, of course, his need to polarize himself from Obama, whose success Jindal believes comes at his political detriment, even as the Party unabashedly refers to him as "the Republican Obama." What they really mean is "The Anti-Obama," but that's another post. The second is his need to maintain a Republican stronghold in the South, which is and would always have been impossible to achieve without appealing to the South's nastiest legacy: racism. I'm sorry to say that to a majority of Louisiana's white population, the term "unemployment benefit" is synonymous with "handout" or "welfare," terms they despise, even though poor whites are the greatest beneficiary of all of them. The Depression is not firmly enough entrenched at this point (and god-only-knows how long it would have to be) for this demographic to let go of the notion that Jindal is refusing money to black people, who, they believe, are solely responsible for every ill known to humanity, including the fact that they--"hardworking [white] people"--have to pay any taxes at all. Jindal is, of course, quite keen to this idea. Otherwise, why would he turn down money that results in at least a little spending power for the unemployed when accepting it would cost him nothing but perhaps some fleeting, misguided conservative accolades?

For the love of God, Bobby Jindal, will you please release your political hostages, come to the window, and show us the real new face of the Republican Party?

"It's hard to cut this beast. You have to starve this beast," House Speaker Jim Tucker, R-Algiers, said of the growing job rolls. "You have to force efficiencies through tight budgeting." Getting a handle on Louisiana's payroll will take more than management adjustments, said Sally Selden, a Lynchburg College management professor who runs the Government Performance Project for the Pew Center for the States.

The "beast" of which Tucker speaks is partially comprised of the increase in state health care providers, whose numbers have finally risen in the past year in response to the devastating shortage of health care providers in the New Orleans area since Hurricane Katrina.

"The reality is, you've got to make some tough choices -- about not offering some services," Selden said. "It's not just a management decision, it's a political decision. It's very painful, but it's very important."

The painful decision, it seems to me, would have been the January 2008 slashing of state taxes that now accounts for much of the current shortfall.

Scott said states across the country are using furloughs, layoffs and pay cuts to deal with the economic downturn. California is closing government buildings two days a month.

The federal stimulus package will offer relief to the ailing states, but that should be viewed as only a temporary fix, Selden said.

"Now is the time to make tough choices," Selden said. "If we don't do it now, when will we ever do it?"

Selden speaks of eliminating state services here as one would a decision about when to deal with a crystal meth addiction. From my perspective, her statement would more accurately read "if we don't lay waste to mandatory state services now, while we can make use of this shoddy bandwagon approach to convince people of the inevitability of the process, at what other time do you believe we can get away with such a devastating and perhaps irreversible blow to social services and higher education?"

Do read the entire article if you're feeling nostalgic. The attempt at "journalism" here ranks equally with those of the "journalists" and other "experts" planted by the Bush Administration. There is not a moment's reflection upon the premise that state job growth is an evil from which we must be delivered.
Posted by A.F. at 1:01 PM 1 comment: