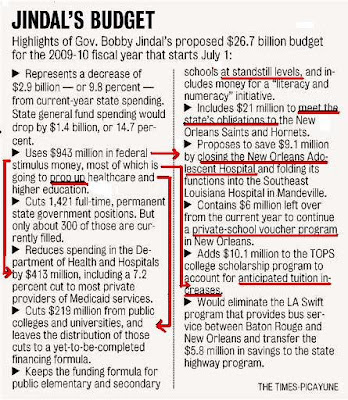 In addition, the budget above is a bait and switch. It claims to use stimulus money for health care and higher education, yet deeply cuts those services simultaneously. The result is a devastating 5% cut from this year's starvation budget for health care and 10% from higher education. The result is closing of health facilities, reduction in Medicaid payments, higher class sizes and fewer course offerings at state colleges and universities, long-term layoffs and hiring freezes, as well as tuition hikes.

Jindal said the stimulus money is intended as a "bridge" as Louisiana downsizes state government after several years of rapid growth.

Again, Jindal finds self-evident the claim that growth in "state government" (i.e., education and health care) is problematic. He also continues to refer to the renewal of state services decimated by Katrina as "rapid growth."

Health and Hospitals Secretary Alan Levine said the budget reductions are intended to lay the groundwork for even deeper reductions in the years ahead, when federal stimulus dollars disappear. "The next three years are going to be very challenging, " Levine said. "We've got to make policy decisions today that decrease our cost structure overall."

Yet again, we're confronted with the rationale that we should not use the stimulus money now because it will disappear later, beyond three years, and the state does not foresee any increase in revenues then, either. No higher tax revenues, no higher oil revenues, no repeal of tax cuts? Or are we merely being ensured that this administration refuses to spend on state services regardless of the shape of our economy?

To add insult to injury, Bobby Jindal refuses to tap into the state's 4M+ "rainy day" fund, a.k.a. the state's budget surplus. A "need" to deny services to the elderly, to mentally ill children, to those on Medicaid, and to working- and middle-class people seeking higher education does not apparently constitute "a rainy day" to Jindal.

For instructions on how to recall a governor, please see the post below.
Posted by A.F. at 4:33 PM 1 comment:

Recall Bobby Jindal: Here's How. Alternate Title: Bobby Jindal's War on Louisiana is Over. (If you want it.) 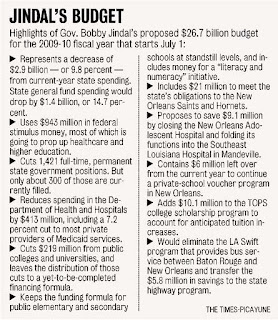 I will be editing this post, probably several times, because I have just thoroughly read Bobby Jindal's new state budget proposal (above). Clear evidence that your government is waging war on you (and I mean "you" if you live in this state) is the psychological equivalent of a blunt force trauma. At least a short recovery period is necessary before one is able to articulate as clearly as one did prior to the assault. Therefore, a thorough, fully documented analysis of the implications of the budget, including a refutation of the argument for its draconian cuts to health care and higher education, is forthcoming.

Because I know that any regular readers of this blog already understand the implications of/ideological motivation for Jindal's budget and already see the outright lies used to justify it, I will, for now, focus on fully explaining the steps that we must now take to remove Jindal from office:

Louisiana is among 18 states with gubernatorial recall provisions, and, unlike many of the other states, Louisiana does not dictate specific conditons under which a recall can be initiated. So we are in a good position to save ourselves: if 33.3% of Louisiana's citizens who were eligible to vote in the gubernatorial election sign a recall petition within 180 days of its circulation, the recall procedure officially begins.

In most states with gubernatorial recall provisions, the required number of votes is about 25% of those in the initial election for the governor in question, so we do have a steeper climb in that regard. But if voters come to fully understand the implications of Jindal's ongoing war against state services, dating all the way back to his tenure at DHH, long before this economic crisis hit us, it's a sure bet that 33.3% will sign.