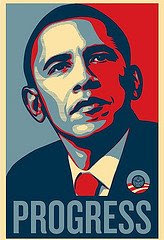 Perhaps more naive than most, I did expect to see an African-American president elected in my lifetime. I still expect to see a woman, and I hope that she is Michelle Obama.

The night that Bush "won" his second term, the only constructive action that I could think of was to make a CD of the "I Have A Dream" speech; MLK's speech against the war in Vietnam, which, arguably, led to his death; snippets from iconic figures ranging from Bobby Kennedy to Muhammad Ali; The Five Stairsteps' "Ooh Child," as well as every cover of the song (even the one by Cyndi Lauper); Rasputina's covers of "I Wish You Were Here" and "Hallelujah"; and every recording I could find of my beloved yoga teacher Michele Baker's Siva chants. I put the cd in the car and listened to it for six months straight. I figured I could at least dream.

I never expected to be moved to fly the American flag (I won't go that far) or put it on my blog (I did).

It was a great day, indeed.

OT: look at this CFP
http://www.caribbean-studies.org/en/pastConf.html

It's in Kingston in June. I have been to this conference before and it is very lovely. Should we go?

Wow, Professor Zero! That sounds *great*! The only problem is that I have never written anything related to Carribean studies. I did do coursework in post-colonialism...15 years ago. Hm. I know that one doesn't have to write to go, but it would be nice to have a chance to have it at least partially funded.

Thanks so much for tuning me in! I'm *seriously* looking into it.