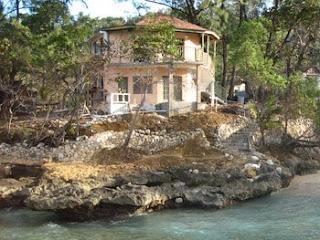 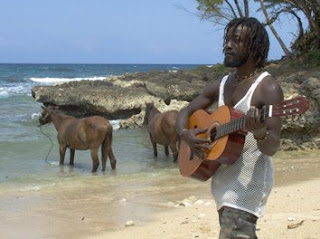 I still cannot fathom that we were lucky enough for the top floor of this cottage to be our vacation home for eight days. The ocean crashes below three sides of house, and with open windows all around, one gets so used to the sound that a kind of withdrawal occurs later. No air conditioning is needed because of the cottage's design, and hot water is provided by solar panel. The retreat, Strawberry Fields, is in a still somewhat remote area--Robin's Bay in St. Mary's Parish, on the northeast coast. The remoteness won't last for long, though. Given that the EU has built a paved road from Ocho Rios, which used to be a four-hour drive but is now one and a half, developers are salivating. There was a casino deal literally next door to the retreat, but it fell through, thank god. The Robin's Bay people want development, but not mammoth resorts, certainly not casinos. They want eco tourism, from what I heard. One 1600-acre estate, formerly Greencastle Estate (for which Robin's Bay was the slave quarters until Emancipation on August 1, 1838), has sold a hefty portion of its acreage with a stipulation that it can be used only for eco tourism development. Absentee owners of much of the other land, who have demonstrated little interest for half a century, have started serving eviction notices to "squatters"--families who built and passed down little houses without electricity or indoor plumbing. Speaking of emancipation, the poverty in Robin's Bay is so glaring that I wonder just how much has changed there since 1838. The one school has no inside walls and no indoor plumbing.

I'm not laboring under delusions that Jamaican people aren't jacked up every time they turn around. 83 cents of every tax dollar goes to (mostly interest on) predatory loans from World Bank, the government is unabashedly corrupt, and the contrast between rich and poor is unapologetically harsh. Still, the situation there isn't one of constant smoke and mirrors as it is in the United States, and being there, I realized almost immediately that the energy I use unconsciously, on a daily basis, to reject the constant bombardment of lies and the distortion of reality from American media, was restored. I know this is a phenomenon familiar to anyone who spends time in any remote area--that sense of liberation that comes from realizing that one's perceptions are not constantly micromanaged from all sides, all the time. I also realize that I was a very privileged and pampered tourist, lucky enough to be provided conditions under which this realization could occur.

Talking to Jamaicans, Europeans, and Canadians throughout the trip (and no Americans, thankfully :), I realized that my conversational partners engaged me as though they were tiptoeing around a severely mentally impaired person. For instance, a co-owner of the retreat spoke to me at first quite delicately about the possibility of visiting Cuba, explaining that there was much love for Castro among Cubans, as he had liberated them from the corruption and brutality of Batiste. Once I told him not to worry, I didn't buy into American propaganda about Cuba, or the embargo, or the insane fear of communism, he was noticeably relieved, as though by some miracle he may be engaging one of the less insane Americans and was not going to have to invest nearly as much energy as he'd thought into protecting the delusions of the guest he was having breakfast with. He uttered a line that I ended up hearing from several people whose job it was to be nice to us: "Many people here believe that the American people are like Bush, but I tell them that's not true." He was the first person I had a conversation with, so afterward I started making a point of apologizing and expressing extreme embarrassment about the actions of my country. I often got an earful in return: "What are Americans thinking?" "You know, we're not strangers to water shortage, but you are." "We won't fly on any American airlines or stop in the U.S. until you stop the war." "I won't buy anything American if I can help it." "My daughter's husband works in Florida, but she refuses to apply for citizenship because she refuses to say the pledge." "Do Americans realize that their economy is collapsing?" "If you elect Obama, you might have a chance." "Americans are probably going to get scared and elect McCain, aren't they?" and "We're so glad you're sensitive to how the rest of the world feels about you. Most Americans aren't."

This was the greatest vacation of my whole life.
Posted by A.F. at 1:06 AM

It's so sad and frustrating knowing how we as Americans are viewed by other countries. It really is a scary time right now for us....I pray every day to whoever might listen that we're spared another Repub presidency.

I'm glad you enjoyed your vaca - it looks like paradise!

I'd love to go there. I always thought of it as terribly touristy, but I went to Trinidad and adored it, and people said if I liked that I'd like Jamaica. And I liked all the Jamaicans I met. I'm so glad you went!

Thanks, Cero. Yes, I love it there. The touristy areas--Montego Bay, Negril, and even Ocho Rios, can be hard to take because there's a feeling of not really being in Jamaica. But so much of the country is not touristy. I know that everybody has their special places, but this area on the northeast coast (I'd been there before) I call my power spot, ground zero.

Wow. It looks so beautiful. I have a friend who has a bar down there. Not sure what part of the island but I think it's the Paradise Cafe, named after her bar here. I keep saying I'm going to go check it out. Haven't been island hopping since my days working at MississippiRiverLand Airlines (not its real name;). Thanks for the report.

Ooh, Sophmom, if it was the airlines whose name is coined from Mississippi River Land, we flew on it both ways: first leg, our seats had been given away and the woman at the gate yelled at us repeatedly (yes, yelled) for completely irrational reasons as though it was our fault that she had given away our seats, our luggage was lost, and somebody else's luggage was delivered to us. Second leg, there was a line of about 400 people (yes, 400) to get onto this airline's flights in Montego Bay although all other airlines were functioning normally without a wait. It took three hours (yes, three) to get through the line, and once people finally got to the window, they were *all* asked to fill out *luggage tags*, which had not been available at any other point in the 3-hour wait, and because of all this chaos, our plane departed nearly two hours late and we missed our connecting flight to New Orleans, after which we spent another hour plus in the Del-, uh, Mississippi River Land customer service line! I bet your glad you don't work there anymore!

Charlotte, Sophmom, Cero, and everybody: I have this plan that N.O. bloggers and everybody else looking for an escape hatch if the worst happens should start a relocation fund in which we buy an acre in this idyllic area, build a a couple little houses, share the land with the "squatters" rather than evicting them, and hence have a beautiful place to flee to. Ha, I've allotted my $50 savings for this purpose already :)

On the escape hatch: I am for it and I mean it - i.e. not just as an idea, I'd sign up and start working concretely toward it. I know other people who would, too, although the hardest part is agreeing on where. This spot would be good enough for me, I can tell, even though I haven't been there. profacero@gmail.com

I'm glad you're interested, Cero. I'll email you all the details I have. We're actually quite serious, too, and have more than $50 (no thanks to me). Shoreline there is around 100K/acre right now, but my understanding is that current owners, mostly British and American, are unwilling to sell individual acres, so it takes a group of committed people to make an acceptable offer. Land near the shoreline is about 30K/acre.

This sounds amazing. Wish I could take a retreat like that right now.

must be nice
Nice spot u have here, hope u don’t mind the drive by, do chk me out one day

rawdawgbuffalo and if u like what u read, maybe u will come back, even Blog Roll Me

Way to inspire envy throughout the land! It would be nice to get away from familiar surroundings. Sounds inspiring!