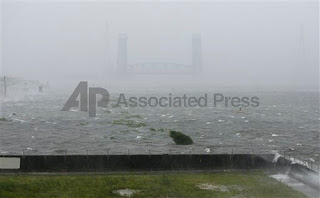 Here's a comment I left at The Field Negro on 9/1 in response to some commenters who felt it necessary to inform each other that New Orleanians should come to terms with the dangers of living below sea level and move somewhere else because we are doomed. I want to make it clear that The Field Negro himself did not share that opinion. His post acknowledged our justifiable outrage, blasted Bush, and sent us heartfelt well wishes. One conservative commenter was so outraged that he kept posting repeatedly about how we should pull ourselves up (and away). He even went after a lady who posts as "Granny Standing for Truth" AFTER she told him that she'd lost someone in Katrina, it was a very upsetting subject for her, and that she was not going "to let [him] go there with [her]." Damn.

It's so sad (for them as well as for us) that so many people do not understand that we don't have only a New Orleanian problem, we have an American problem. ALL of our infrastructure is failing. What should have been a wake up call to everyone in the U.S. served so many as just an excuse to call us idiots (again).

Despite the 12 hour-drive to get only 250 miles out of New Orleans, the painful memories associated with the same drive three years ago, and the very real possibility of having no home and no job to return to, I still have a last nerve, which the GOP and mainstream media have managed to get all over. I've watched every Republican from the state governor to the president pat themselves on the back all day simply because the storm did not make landfall at quite a high enough intensity to breach the levees and because they have gotten enough of a clue not to have a party while a state is threatened with catastrophe. Mainstream media has allowed them to get away with that and has perpetuated the notion that "progress" is what saved us. No. The weakening of the storm did.

A barge, moored YESTERDAY near the same industrial canal that was breached by a unmoored barge three years ago, came loose today and happened not to have breached the same flood wall again. Is that really progress?

During Katrina, mainstream media got honest for about a week. During Gustav, they've not been honest at all.

I can move away from New Orleans to avoid hurricanes, but I'll also need to stay away from the entire Gulf Coast as well as much of the East Coast for the same reason. I shouldn't move back to New York because of the relative ease with which the subway system could be attacked. I'd also need to say away from any earthquake prone regions on the West Coast, as well as any of the Heartland, which sees devastating tornadoes [and flooding] regularly these days. I think at this point the best bet is Holland, where they got their floodwalls right the first time.

Excellent. And true. (See you after Ike. If my roof shingles go again I will be p.o.'d.)

Yikes! Good luck with your roof shingles and take care!