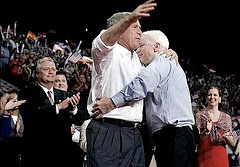 With the exception of Katrina coverage, I've gotten my news the old-fashioned way for the past 10 years--by reading it (on the internets). Lately, though, with all the debates and primary coverage, I've cautiously returned to shoddy politicotainment of the tv "news" channels. So last night during *Hardball,* I was sucked right into the "Breaking News," interruption of programming and all, that was the flap over John McCain's decade-old near-dalliance. Upon hearing the first bit of the news, that McCain's top aides had found it necessary to "protect" the man "from himself," I flew out of my chair and entreated a prominent N.O. blogger who I already knew was quite busy at the moment to turn on MSNBC right away. Gee, did I ever feel stupid as the coverage dragged on...and on. Back in my day, they used to interrupt programming only when something really bad really had happened.

There is absolutely nothing that would ever sway me to vote for John McCain. But damn, I really don't care if he almost, maybe, or did have a thing with a lobbyist eight years ago. While the tv news networks tossed around the story as though it was NYT itself interrupting their programming, I noticed that the kinda-sorta-maybe-coulda-been sex scandal was not even the focus of the NYT story to begin with.

I felt the same way about the Bill Clinton scandal and agree with Howard Zinn:

What the [Monica Lewinsky] incident showed was that a matter of personal behavior could crowd out of the public's attention far more serious matters, indeed, matters of life and death. The House of Representatives would impeach the president on matters of sexual behavior, but it would not impeach him for endangering the lives of children by welfare reform, or for violating international law in bombing other countries (Iran, Afghanistan, Sudan), or for allowing hundreds of thousands of children to die as a result of economic sanctions (Iraq) (659-660).*

That's the worry with McCain, as well as all that is metaphorically exemplified in the photo above. And now there's McCain's unfortunate but predictable response: to "go to war" with NYT.

I don't give a damn what a politician's (or anyones) sexual activities are....I only care that they do their job.