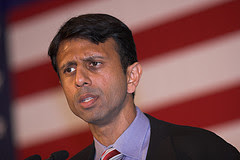 When someone sets about such reprehensible acts as freezing federal monies received by Louisiana state institutions in the aftermath of the Floods, cutting 240 million dollars from health care and education (in the midst of a state budget surplus), and simultaneously supporting a 300-million dollar tax cut, so that even when he leaves office the funding to restore services will be gone, I wonder what is wrong with that person.

I know that this behavior simply adheres to a neo-conservative agenda to starve all government services, lower taxes, and ultimately disabuse the populace of any idea that their government is good for anything but making war and protecting big bidniz. But what makes a person buy into that ideology?

Often I bandy about the term "evil" to describe the people who do, but I don't even believe in the simple equation of good vs. evil. Apparently Governor Bobby Jindal does.

Loki's recent post at Humid City, "The Exorcist, Jindal, and the Oxford Review," is an excellent read. She links to a 1994 article in which Jindal details his experience at the exorcism of an "intimate" but "platonic" female friend!

See what you think of the background information Jindal provided in the article:

Though she had not said anything, I knew something was wrong. Susan and I had developed an intimate friendship; indeed, our relationship mystified observers, who insisted on finding a romantic component where none existed. I called her after the University Christian Fellowship (UCF) meeting -- UCF is an Inter-Varsity Christian group composed of undergraduate and graduate students. Though the interdenominational group's weekly program of songs and prayers had produced the usual emotional high among most members, Susan had left the meeting in a very sullen mood. I asked her to join a group of us who were attending a Christian a cappella concert to be held on campus that same evening.

Despite our intimacy, Susan and I had not spent much time together this past year. We had succumbed to pressure from our friends and decided we should not be so emotionally interdependent without a deeper commitment. To be honest, my fears of a relationship and the constraints of commitment had kept us apart; our friends' objections merely provided a convenient excuse. Still, I felt comfortable asking her to come to the concert, and she accepted the invitation. Though Susan appeared composed throughout the concert, her sudden departure in the middle of a song convinced me otherwise and affirmed my earlier suspicions.

There was no doubt in my mind that I had to leave my friends and follow her outside. I was not exactly sure what I would do or say, but I knew I had to run after her. I found that she had not gone far, but was sobbing uncontrollably outside the auditorium. Since we had been very careful to avoid any form of physical contact in our friendship, I was not sure how to respond. My inaction and her sobs produced a very awkward situation. Fortunately, a female friend who followed us out was able to comfort Susan with hugs and soothing words of reassurance; her quick action was in stark contrast to my paralysis. Once Susan had regained her composure and fell silent, I knew I had to intervene. The female friend meant well, but did not know Susan well enough to provide the advice Susan was sure to seek.

Not even knowing the cause of this raucous scene, I asked Susan if she would like to talk, and volunteered to walk her home. Wanting to avoid any additional embarrassing scenes, I thought it best to remain in silence while we walked. I dared not cause another emotional outpouring until we were safely behind closed doors. When we finally reached her dorm room, I promptly sat Susan on a bed and placed myself in a chair located several feet across the room. This physical arrangement was hardly conducive to the love and support I was supposed to be providing, but I was too scared and unsure of myself to get any closer. (Loki's narration of the exorcism itself)

Jindal's obvious attempts to distance himself from a person he claims to care about, to bizarrely avoid the idea that he or anyone else is responsible for her emotional state, and to conclude that the culprit is The Devil him/her/itself, may be an inroad to understanding the personality of one who wreaks this kind of havoc on an already-hobbled state and feels great about doing so.

'Sup, holmes! Came via Field Negro. Nice place you got, and good on ya' for blogging about LA politics. Think global; act local!

I'll try. Love you back, Cero!

It's sort of amazing. He seems completely crazy ... and rereading your post I *do* wonder, did he drive her into this state and cover his tracks?

Thanks for reading this. Jindal's point of view gets stranger and stranger throughout. Here's a synopsis: The woman, Susan, is about to have surgery for treatable skin cancer, and a friend of hers has died, so she's very depressed. Jindal magnanimously decides to physically comfort her, to become her "knight in shining armor," to be at her side forever and to "magically" solve all her problems, one by one. Then they don't talk for awhile (?) He's very surprised that when they meet again, she says she doesn't want to see him because he doesn't love her. Next time he sees her, she has a seizure and/or nervous breakdown, screams his name at the top of her lungs and continues in a voice that he claims not to recognize, "Bobby, you don't love Susan." So he concludes that she's possessed by the devil, and he is thereafter a believer in "spiritual warfare."