Rant that You've Heard Before 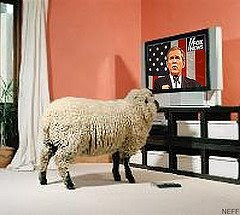 Photo: twas_brillig
What bothers me a lot: Hearing that Bush's presidency has been unsuccessful. That he has been the worst president in American history is evident from any humanitarian point of view, but his presidency looks unsuccessful only if one imagines that the aim of his administration was ever to place human welfare above that of multinational corporate interests. He was the perfect figurehead for the neo-conservative movement: marginally intelligent, easily manipulated, unable to think critically, shockingly unempathetic, and preoccupied with a stilted and destructive perception of masculinity. That he has been the worst president in our history and simultaneously the most successful at accomplishing his party's agenda are not mutually exclusive points. That agenda was and is to move away from the concept of government as we understand it and toward not just a nation but a world that is entirely corporate dominated, entirely privatized. In those terms, Iraq is a success story, New Orleans is a success story, the budget deficit, the collapsing economy, crumbling infrastructure, and the health care disaster are success stories. The majority of us are closer to wage slavery than we could have ever imagined. Our educational institutions, health care, retirement benefits, prisons, and military move closer and closer to thorough privatization. And it doesn't help that our governor of at least the next 3 1/2 years is entirely complicit. It's also dangerously naive to believe that an ample number of Democrats have not been complicit, as well. The political landscape of the past twenty years has ventured so far right that a moderate conservative looks far left to most Americans.

Kos via NYT recently provided the clearest explanation of soaring oil prices that I've seen, one that exemplifies the kind of twisted success story I'm talking about:

Four Western oil companies are in the final stages of negotiations this month on contracts that will return them to Iraq, 36 years after losing their oil concession to nationalization as Saddam Hussein rose to power.

Exxon Mobil, Shell, Total and BP — the original partners in the Iraq Petroleum Company — along with Chevron and a number of smaller oil companies, are in talks with Iraq’s Oil Ministry for no-bid contracts to service Iraq’s largest fields, according to ministry officials, oil company officials and an American diplomat. ...

The no-bid contracts are unusual for the industry, and the offers prevailed over others by more than 40 companies, including companies in Russia, China and India. The contracts, which would run for one to two years and are relatively small by industry standards, would nonetheless give the companies an advantage in bidding on future contracts in a country that many experts consider to be the best hope for a large-scale increase in oil production.

There was suspicion among many in the Arab world and among parts of the American public that the United States had gone to war in Iraq precisely to secure the oil wealth these contracts seek to extract. The Bush administration has said that the war was necessary to combat terrorism. It is not clear what role the United States played in awarding the contracts; there are still American advisers to Iraq’s Oil Ministry.

And despite all that, Blackwater, Halliburton, KBR, Dyncorp, Bechtel, et al, few Americans seem to be able to come to terms with the fact that Obama is (have you heard??) biracial and his wife is just outright black (!), HRC is a white woman who lost the nomination (Dear God!), and McCain is old and crazy.

Exactly. According. To plan. Hijacked, then plundered.