Energizer, Please Take Out the Battery 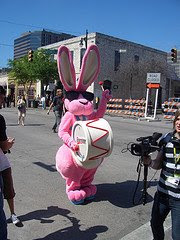 1. What did Hillary Clinton say this afternoon that she could not have said on Tuesday night, or back when it became mathematically impossible for her to win the nomination?

2. I'm going to try to believe that she suspended rather than ending her campaign so that she can still try to recover some of her 20 million dollars and for no other reason.

3. I was not thrilled that she seized yet another opportunity to popularize her vainglorious claim of victimhood:

"Although we weren't able to shatter that highest, hardest glass ceiling this time, thanks to you, it has about 18 million cracks in it and the light is shining through like never before."

4. Nor did I think that this statement was in particularly good taste:

"Well, this isn't exactly the party I planned but I sure like the company."

5. Enough said. I will suspend further commentary on Hillary Clinton pending any further outrageous behavior from her suspended campaign.