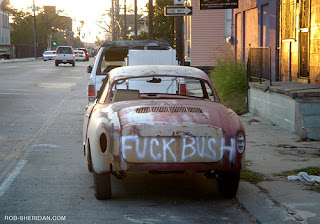 In a nod to the hurricane recovery along the Gulf Coast, President Bush is expected to announce tonight that New Orleans will host the annual summit of North American leaders in April.

A senior White House official said Bush chose New Orleans to honor the "resilience" of Gulf Coast residents and the outpouring of volunteerism that has flowered in the areas hardest hit by the 2005 hurricanes...

Falling more than two and a half years after Hurricanes Katrina and Rita devastated the region, the summit is likely to refocus international attention on the slow pace of the recovery and also serve as an economic boost [?]for the city. Bush called Gov. Bobby Jindal and New Orleans Mayor Ray Nagin today to let them know.

The decision by the White House to host the summit in New Orleans comes just months after the Presidential Debate Commission passed up the city's application raising questions about whether the city had recovered sufficiently. More

Addendum: In case you are subjecting yourself to the State of the Union address (I am not), here's kind of a fun game. In years past, a friend and I would turn on our instant messengers and send a * each time Bush said the opposite of what is true (e.g., "we're fighting for democracy"), a # each time he projected his own character or actions onto others (e.g., "_____ is an evil tyrant"), and a ? each time he mangled the English language. There's no real scoring system here, but the game is guaranteed to keep your fingers moving faster than you'd even imagine and provides a little mechanism for venting stress/frustration/outrage.--A.F.
Posted by A.F. at 3:38 PM

Oh, we can't host a presidential debate here, but we CAN get the leaders of all the North American countries to shuffle on into Dooky Chase's to see how well (badly) the recovery of this region is going? Nice. Very nice.

Yep. A nice little nod to our bootstrapping.