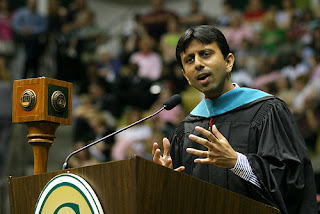 Apparently, the hiring freeze by Bobby Jindal (above) on all state positions will be lifted in June. But typically, colleges and universities recruit in the spring for open employment lines for the fall semester. Faculty and staff often commit to verbal agreements, with officially binding paperwork completed in the summer. At this point, administrators cannot make verbal agreements with confidence, and prospective faculty and staff will be reluctant to rely on agreements pending approval by Angele Davis of the governor's budget office. The outcome: many talented prospective faculty and staff will move on, as in academia, people generally commit to a field rather than to a state or city. Perhaps Governor Jindal's office is correct that requests for exemptions on the basis of demonstrated need will be liberally granted. But many colleges and universities cannot fully demonstrate a need until projected enrollment is met, which, as I see it, will create a delay in much-needed hiring. Such a delay means, logically, a decrease in the applicant pool and subsequent understaffing. The delay may also lead to an over-reliance on adjunct faculty, who are contracted on a course-by-course basis, part-time, for far less compensation for the same work performed by full-time faculty. Typically, they do not receive health benefits.

Also, if being granted an exemption is as easy as asking, on a case-by-case basis, why would Jindal project a $25 million savings? And why would his administration take on such a time-consuming and, doubtless, extremely expensive task of micro-managing hiring decisions?