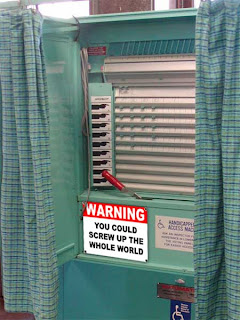 Thanks, Dennis Kucinich! At the very least, a recount of New Hampshire's votes will bring attention to touch screen voting in many states, which is even more insidious, as I understand it, than New Hampshire's optical scan system, though both are products of Diebold.
See Farhad Manjoo's latest article in Salon:
http://machinist.salon.com/feature/2008/01/11/new_hampshire_vote/index.html
It is more than a little weird that pre-election and exit polls have been a little wacky in the past...8 years. And I don't know about you, but it's still bugging me that Pat Buchanan managed to pull out the Jewish vote in Florida 2000. But I know that was just user error because of confusing butterfly ballots, another issue entirely. Call me paranoid.
Photo Credit: www.thiscenturysucks.com
Posted by A.F. at 3:28 PM