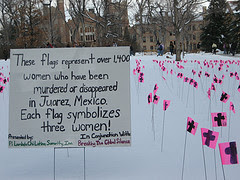 How NAFTA figures in (from Intercontinental Cry: "The Femicide in Ciudad Juarez"):

For more than a decade, the cities of Chihuahua and Juarez, near the US-Mexico border, have been killing fields for young women. Over 400 women have been murdered and an additional 4000 women have gone missing since 1993.

“A significant number of victims work in the maquiladora sector - sweatshops that produce for export, with 90% destined for the United States. The maquiladoras employ mainly young women, at poverty level wages. In combination with lax environmental regulations and low tariffs under the North America Free Trade Agreement (NAFTA), the maquiladoras are amassing tremendous wealth. Yet despite the crime wave, they offer almost no protection for their workers. High profile government campaigns such as Ponte Vista (Be Aware), a self defense program, and supplying women with whistles have been ineffective and are carried out mainly for public relations purposes.”

As the United States and the rest of the world focus their attention on the Middle East, atrocities are taking place in other regions of the world unnoticed by the international community. The violence that ravaged Latin America during the 1980s is not over. A wave of violence is taking place at this moment in Guatemala that is unknown to most of the world. The targets are young women between the ages of 15 and 26, and the murders are taking place primarily in or around the nation’s capital, Guatemala City. The pattern of violence includes sexual assault and physical torture before the women are killed and left in public places. In a country fraught with residual violence from its thirty-year civil war, murders are not front-page stories. This is particularly true when the victims are women, who are not valued by paternalistic Guatemalan society.

In the past three years nearly 1,500 young women in Guatemala have been murdered. Already this year, 257 women have been murdered, with the perpetrators going unpunished.1 In the Mexican border towns of Ciudad Juarez and Chihuahua, a similar pattern of violence against women has caught the attention of international human rights groups and non-governmental organizations. According to a new report by Amnesty International, 370 women have been murdered in Mexico during the last
ten years.2 Among the responses to the international press on the Mexican killings is a new resolution in Congress (H.Res 466), which calls for the United States government to work with the Mexican authorities in an effort to solve the cases.

This article (in PDF) is a must-read. When I first heard about femicide, via a co-worker, the details were so horrific that I hoped they were the stuff of urban legend. They're not.
Posted by A.F. at 4:19 PM

It's a drop in the bucket, but what a cool drop:
Women from London and...Ohio, I think?...are bringing this kind of self-defense course to Juarez.

(Totally worth donating to, by the way! I do, ever since I took one of those types of courses.)

Whoops--looks like the video says Tijijuana. Well, I'm almost 100% sure that they're also doing work in Juarez now. Or that another IMPACT-style self-defense place is. I'm sure I've seen "London/Juarez" in e-mails.

Deputize and arm young women, semi-auto concealed, patrols in early morning and early evening (when maquiladoras are walking to/fom work, plus a little earlier or later to get the isolation required). Have a fast-response backup team centrally located with each of the four or five decoy women fanned out from the team along main traffic routes. Authorize the women to shoot at the first occurrence of a threatening move, such as a car coming to a stop beside a woman on a traffic overpass and a man getting out. a few dead guys will certainly convice the others that this "sport" is going out of fashion. Because drug cartels control so much of CJ, it is necessary to arm the "potential victims" rather than relying on other kinds of stakeouts - the police are overstressed already. In the "new Mexico," one team of five young women with training and five well-armed backup males with fast vehicles ought to do it.

So, what you're saying is the only way to solve this is with more violence. Yeah, you might be right. But then again, where is the money for the training and man-power going to come from?