A general mood of displeasure 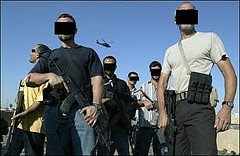 From CNN, regarding the renewal of the U.S. defense contract with Blackwater:

Blackwater guards shot and killed 17 people, including women and children, last September, prompting an outcry and protest from Iraqi officials.

"This is bad news," al-Maliki adviser Sami al-Askari said. "I personally am not happy with this, especially because they have committed acts of aggression, killed Iraqis, and this has not been resolved yet positively for families of victims."

About 25,000 private contractors from three companies protect diplomats, reconstruction workers and government officials in Iraq. Under a provision put into place in the early days of the U.S.-led occupation of Iraq, security contractors have immunity from Iraqi prosecution.

Al-Askari said he would push for the Iraqi government to contest the contract renewal.

Al-Askari said there is a general mood of displeasure within the Iraqi government because of the contract renewal.

Iraqi government spokesman Ali al-Dabbagh said a joint Iraqi-U.S. commission was set up after the shootings, and Iraqis told U.S. officials that the rules of engagement and use of force must be changed.

As a result, a State Department security officer accompanies every convoy manned by contractors, Al-Dabbagh said, and every vehicle is outfitted with a security camera. Recordings from the camera are sent to a command center.

Oh, well, the oversight of a State Department security officer. Great. A camera and a command center. And what command center would that be exactly?

Just for the record, CNN's initial title for this story was "Blackwater renewal irks Iraqis." Somebody had the damn sense to change that title before I could even link to its ass. But at least MSM is covering the story now.

See below on KBR (a subsidiary of Halliburton), another group of contractors.
Posted by A.F. at 10:43 PM

We need to stop using the approved language of the State Department, calling Blackwater Mercenaries, "security guards". This is doublespeak. We have to be more intelligent about these matters and be careful using this deliberately deceptive language. Call it what it is. Blackwater Mercenaries.

Yes, good, they are mercenaries, privatized military forces, who answer to no one except Blackwater, and perhaps even better terms would be "Blackwater Murderers" or "Blackwater Hired Guns," but those terms would also minimize. Blackwater is, as Scahill notes, "the world's largest mercenary army," operating independently and with the capability to overthrow many of the world's governments. I assume that my readers understand the function and history of Blackwater, and that may be a mistake, so thanks for calling me on it. We did have our own experience with Blackwater Mercenaries post-flood, here in New Orleans.

The point of the entry is precisely its use of language--"a general mood of displeasure" (etc.) to describe what can only be "horror." Orwellian newspeak?