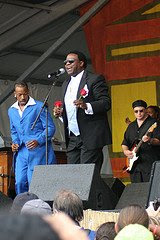 On the walk from LSU Dental School to Jazz Fest, I experienced some of the happiest moments of my return to New Orleans. I love it here, and just walking toward the Fest, my step was lighter, my spine straighter, and my spirits higher than usual. The first thing I wanted was the food, which I'd been looking forward to for days, and I got a combo: crawfish beignets, puffy oyster pies, and something else I can't remember the name of but which is a pasty combination of crawfish stuffing, crafted to look like an apple. You know that the second I turned around with my plate to walk away from the food stand, though, the sky opened before I had my first bite and the rest of the meal, that which was not splashed right off the plate, was...diluted. But, hey, that's okay.

After an hour standing under a very small green tent beside some beer, it was off to The Gospel tent and a too-brief visit to the Mardi Gras Indians before Al Green. Al sounded the same as ever, though he did let the audience do a lot of the singing, which I thought was kind of funny. He threw roses and would begin, for instance, "I'm so tired of being alone..." at which time he'd turn the mike over to the audience to finish up. He interjected a high, masterful, extended trademark "Ooooooooooooeeeeeeee!" from time to time. That was a great show.

I danced a lot even though my back has been in spasm for about a week, so you know it was a great show.

I was quite excited about downloading my photos here, but 1) I knew them to be out of focus and 2) it now turns out that the camera was in fact adversely affected by water. Hmmf. Pay no mind to those clear, sharp, skillful photos over at Bark, Bugs, Leaves, and Lizards.
Posted by A.F. at 5:34 PM

N.O. hearts you back, rent party!

Great information to read. Thanks for sharing.