The Totalitarian State of Walgreens 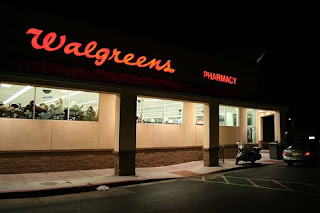 Of the many serious problems here in New Orleans and in the U.S., Walgreens--the one on Felicity, the one on Tchoupitoulas, the one on Magazine, and the two on Claiborne--are the least of our worries. But I brace myself lately before I even walk into any of these locations because of policies and practices that exemplify our bigger problems.

I notice with each successive visit to Walgreens that more of its products are locked up. The locked boxes containing them now feature a button that customers can push for help from a Walgreens associate, who may or may not ever appear, and if he or she does, may or may not have the key. I doubt that Walgreens has enough associates to dispense in a timely fashion everything that is locked up, anyway. And if I were working for near-minimum wage (come to think of it, I am, but just not in Walgreens), I would probably be deliberately slow in making it to the locked boxes, so I want to make it clear that this post is not intended to denigrate Walgreens associates. But have you noticed what all is locked up lately?

1) Razors have been locked up for a long time, not all razors--Walgreens is not concerned about a child unwrapping a razor and mutilating him or herself--but only the obscenely expensive razors. Many razors have become so blatantly overpriced that the many of us would consider pocketing them in protest, so, for this reason, Walgreens has locked away all but the less expensive single-blade, 10-to-a-pack razors that perform more ineptly than rusty antique push mowers.

2) Smoking cessation aids have always been locked up. They are obscenely overpriced, as well, much more so than cigarettes, which are not locked up but are behind the counter. My bet is that it's the price and not the danger that an unattended child may open and chew enough nicotine gum or eat enough lozenges to have a stroke. There's little damage a child could do with a patch, but those are locked up as well.

3) I noticed today that pregnancy tests are locked up. For those of you who know me personally and may be curious, no I'm not in the market for a pregnancy test. But it seems to me that if I were, I would be none too thrilled about waiting around for an associate, especially if I were 15 and trying to get in and out of there without a production. Pregnancy tests are probably overpriced, but they are not exhorbitantly expensive, which leads me to believe that The Totalitarian State of Walgreens may hope that pregnant women (those who will not be delighted with the news) are dissuaded from finding out before they are past the first trimester. Perhaps that is a stretch. Perhaps the Totalitarian State of Walgreens is of the opinion that there are many possibly pregant theiving women here in New Orleans.

4) The OTC allergy drug Zyrtec is now locked up. It must contain pseudophedrine, you may say, but, no, it does not. Zyrtec is locked up because it costs more than $1 per dose. The generic form is not locked up but costs almost as much.

Not all of these products are locked up in Walgreens nationally so I'm forced to believe that the Totalitarian State of Walgreens has issued an executive order concerning New Orleanians and theft, and that really rubs me the wrong way. Most of the products are overpriced to the degree that if only one in ten people paid for them, the profits would still be hefty.

In my past four visits to Walgreens, I have attempted to purchase a sale item. Once I reach the register, however, the product scans at full price. The sale sticker on the shelf is a lying mofo. No, I'm not confusing the products for others close by, I'm not talking about those that require a coupon, and I'm not off on my count or weight. Next time you go in there (though I don't recommend going in there), try buying a sale item! What is even more worrisome is the response of the sales associates when the item rings for full price. When I point out the sign (in one case removing the sign from the shelf and presenting it to the sales associate just to demonstrate that the product, size, and details are correct), the most common response is some variation of "Well, it scans at [a higher price]," as if to say the computer knows all, and that any contrary indication is incorrect. When fellow humans trust The Machine that much, I become frightened. There are also suggestions that the sale must be over and no one has taken down the sign. On two occasions, managers have scanned from the sign rather than the product for me, so if you attempt to buy a sale item in The Totalitarian State of Walgreens, be ready to ask for a manager. Sometimes, though, the store is so crowded and managers so slow that you may rather pay full price in exchange for an evening at home rather than three hours waiting for a manager in the Totalitarian State of Walgreens to agree that The Machine is wrong. There are so many products that do not ring at the sale price that I believe that there is something intentional going on here.

Because of a federal law that is not the fault of Walgreens, all drugs containing pseudoephedrine must be purchased at the pharmacy, and the purchaser must show identification and sign a log that prohibits said purchaser from acquiring more than the daily recommended dose of that drug anywhere in the U.S. I understand that psuedoephedrine is an important component of Crystal Meth, and that a Crystal Meth addiction is almost always deadly, but I'm not sure that this is the means by which to combat it. I don't use the stuff but am not hearing that it's hard to acquire because of this law. If you visit the pharmacy in the Totalitarian State of Walgreens, be prepared to stand behind some person with an obvious cold who is trying to get the usual meds and being told that he or she is not allowed to buy this and that simultaneously, even if he or she is willing to be tracked by the pseuodphedrine tracking mechanism. That person will probably become angry. The other day, it became obvious to me that a woman who had a cold was also otensibly asthmatic and attempting to buy OTC asthma medicine because she (probably) does not have a doctor (probably) because she does not have insurance. She was doing the best she could to take care of herself. The Totalitarian State of Walgreens stopped her in her tracks. No asthma medicine and cold medicine at the same time. Against the rules.

If you have a prescription for a drug that is "controlled," be prepared to pick up that prescription on the same day you run out of it. The Totalitarian State of Walgreens is tracking you and wants to make sure that you don't take too much, even by one dose, and apparently wants to make sure that you don't have a life, either, like a long work day or a trip that would necessitate your picking up the prescription a day early. One may say, "Isn't that between my doctor and me? Can you call her?" The answer is no. Don't bother asking questions in the Totalitarian State of Walgreens (on Tchoupitoulas).

I take a drug that costs only $5.00 for a 30-day prescription. The good news is that there is still a drug that cheap and it's the one I take! When I had insurance, it didn't pay for drugs that cost less than $25. The Totalitarian State of Walgreens has informed me that even though my insurance was never "covering" the prescription, ever, its cost is now $18.80 for people who do not HAVE insurance. Yeah, you heard me right. This is a new rule. The drug was recently the same price for people with and without insurance, but that must not have seemed fair to the Totalitarian State of Walgreens.

Before ringing in my last prescription, with her fingers poised on the keys of the computer database beside the cash register, the Walgreens associate asked perkily, often as we're asked for our phone numbers when we make a retail purchase, "Are you completely out of your medication today?" I don't know what she (or the database) intended to do with this information, but I did not offer it. My response was, as pleasantly as possible, since I know she was only taking orders, "Why do you ask?" She smiled reassuringly and offered this non-sequitor: "That's no problem, Ma'am," and completed my sale. I paid $18.80.

I'm defecting. But what I dread about that is finding out that most or all of the above is true in other establishments as well and not only in the Totalitarian State of Walgreens.
Posted by A.F. at 1:57 AM